Forget Beltran, Get Me This Guy 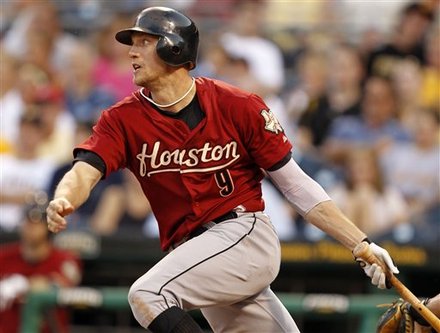 The All-Star game is behind us and now it is time to look towards the MLB trade deadline.  Theo has made it clear that he will be looking for an OF bat prior to July 31 and if I had my choice that guy would be Hunter Pence.  Pence may not be as sexy of a name of as Beltran, but let’s face it, Beltran is a stiff. It has been reported that the Mets would eat a good portion of the money owed to Beltran but are looking for a top prospect in return, the Astros have also said they would have to be “overwhelmed” to deal Pence.  Neither guy will come cheap, but if Theo could land Pence he could be the solution in RF for years to come.

Pence will be due for a nice pay raise via arbitration next season, but with the Million Dollar Baby J.D. Drew coming off the books combined with the weak free agent OF market in 2012 and 2013 it may not be a bad idea to give up a little to land this guy.  Pence’s game may not be the prettiest but his gritty old school style gets results (career .292 BA) and would be a perfect fit in Boston.  The Sox have the power and put up like 15 runs a game and any guy acquired before the deadline would most likely hit in the 7 or 8 hole. What the Sox need is a player who can get on base and drive in a couple runs here and there, Pence would be the perfect fit to stabilize the back end of the Red Sox lineup.

Outside of one or two productive season’s and a 2004 postseason where he hit like 49 homeruns, Beltran has been kind of a stiff; spending most of his prime dominating the DL.  Pence is 28 years old (6 years younger than Beltran) and has put up solid offensive numbers in his first four Big League seasons to go along with a pretty impressive glove (Pence committed only 1 error in 2008 while leading the N.L. with 16 outfield assists).  The young Texan’s strong start to 2011 was good enough to land him his second All-Star selection. Pence has been stuck in the cellar playing in Houston and his style of play is reminiscent of the original Dirt Dog Christopher Trotman Nixon which has my gut telling me he would thrive playing meaningful ball games each night in front of the most passionate fan base in all of sports.

Josh Reddick has been solid this season but I do not see him as the long term solution in RF.  Reddick reminds me a lot of David Murphy who played well for the Sox a few years back and has been a serviceable 4th outfielder for the Texas Rangers (the Sox dealt Murphy for Eric Gagne).  Therefore there is no better time to take advantage of  the young Red Sox outfielder’s nice start to 2011, a package involving Reddick and another prospect or two may be enticing to a rebuilding Astros squad.  The Sox would control the rights to an an arbitration eligible Pence in 2012 but for some reason the Astros young RF comes off as the kind of player who may be open to a contract extension at a fair price to play for a perennial Championship contender. Theo obviously knows more than I do but Pence’s ability to hit for a high average and poke a few out of the park (25 Bombs in ’08, ’09, ’10) would certainly be an upgrade from J.D. Drew.  Dumping Drew for Pence would add a nice right handed bat to a lefty dominated lineup leading me to believe Pence would fit perfectly in the Red Sox lineup this season and for seasons to come.  I would love to see this guy guarding Pesky’s Pole at the Fens, just something to think about Mr. Epstein.