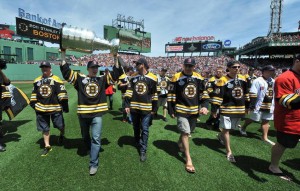 I know I am a couple days late, but deal with it.  The Bruins bender continued at Fenway on Sunday, with Lord Stanley and the boys throwing out the first pitch before the Red Sox put a beating on the Brewers.  I first want to say that I have never enjoyed a ride or a team more than I have these Boston Bruins, with the 2004 Red Sox being the exception.  These bros just ran around for two months punching peoples teeth in and winning big game after big game in big bad Boston fashion, and now they have earned their right to celebrate.

The post season run made by this collection of lunatics had a similar feel as the championship runs of 2001 Patriots and 2004 Red Sox, it was meant to be and we all knew it.  Three Game 7 wins, two 0-2 comebacks, 455 fights, and 200 more story lines that made this run one of the best experiences I have had as a Boston sports fan.  Like the 2001 Patriots and 2004 Red Sox, the 2011 Bruins were a true team, outside of Tim Thomas there is no player anyone would call a “household name”, but a collection of grinders who found ways to find the back of the net while brining Lord Stanley home to Boston, giving me a thrill I will never forget. (even after they bring back like 3 more Cups)

A four day long celebration, that saw the Cup being strolled through the streets of the North End in a baby carriage, throwing a couple back at Tia’s, and ripping up Foxwoods, ended at Fenway Sunday afternoon (Your boys Seguin and Marchand continue to tear through the HUB, so ladies beware). The Sox were heavily favored in this game as everyone who likes to Bet on MLB woul agree. Black and Gold in the stands, the goal horn playing after every Red Sox run, the Red Sox even pretended Luongo played for the Brewers tossing 12 runs on them fast, it was Bruins day at Fenway.  Boston teams feed off each other, a flection of the passion and high standards us as fans ask from these organizations.  Don’t get me wrong, all the championships and parades are cool and stuff, but I enjoy the unity that playoff runs like this bring to the city, whether it is going to a bar and not seeing 19 fights or seeing one team invite another to their park for a celebration.  Boston is a tight nit community and nothing shows it more than seeing one of our own crowned World Champs.  Thanks Bs, I can’t wait to head to the Garden when Jeremy Jacobs and the boys invite the Sox to a game to celebrate their World Series victory.