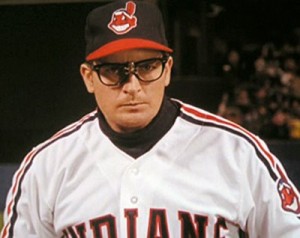 Alfredo Aceves did his best Rick “Wildthing” Vaughn impression last night,  giving up four runs on four hits and six walks while throwing a career high 98 pitches during a 5 IP no decision.  Filling it for a sick Josh Beckett, Aceves had trouble finding the strike zone putting the Sox in an early 4-1 hole.  The Sox chipped away at Padres starter Matt Latos, eventually tying the game at 4, behind four hits from Kevin “the Chin” Youkilis, Ortiz’s blazing speed, and a game tying RBI single from AL MVP Adrian Gonzalez in the 6th.  However San Diego’s bullpen was lights out (they have a really impressive bullpen, the Sox should take a peak around the deadline to see if they are selling any of those dudes) and the Padres were able to take game two of the three game set 5-4.

The Red Sox finished the game with 13 hits, but were just 3-13 with runners in scoring position.  I look for the Sox to bounce back this afternoon and take the series from the Padres and head to the Steel city off a W, not looking forward to it though, Lackey has replaced Dice K as the most miserable Sox pitcher to watch.  Check for my twitter updates during the game, that’s if the Lackey Effect doesn’t have me drinking by the 2nd.