If I were to tell you in January that there would be a player that would hit .415 during spring training, most fans would think I was talking about Adrian Gonzalez, maybe Dustin Pedroia or even Jacoby Ellsbury, however I don’t believe anyone would have thought that player was Pedro Ciriaco.

Ciriaco has not only impressed Red Sox coaches with his bat, but also with speed, last weekend he was able to score twice from second base on a bunt, something I have rarely seen in my years watching baseball. In his 24 games played he has stolen seven bases (which is currently tied with Jason Repko for the team lead,) as well as 47% of his hits going for extra bases (Eight out of seventeen).

Last season while playing for the Indianapolis Indians (AAA Affiliate for the Pittsburgh Pirates) he hit a dismal .231 with 2 homers 24 RBI’s, he stole 13 bases in 71 games he was also caught stealing 7 times in that stretch. Over his seven minor league seasons he has hit .270 with 24 home runs, 298 RBI, and 401 runs scored.

The only reason that Ciriaco has a chance to make the roster is due to Carl Crawford’s injury, and the possibility that closer Andrew Bailey may begin the season on the DL as well. While Mike Aviles has been named the starting shortstop coming into the season, it will be interesting to see how manager Bobby Valentine will be able to work Ciriaco into the lineup and use his speed on the base pads late in games. I for one hope that the Red Sox give Ciriaco a chance to start the year in Boston, it is a low risk high reward for the Red Sox and a risk I hope they are willing to take. 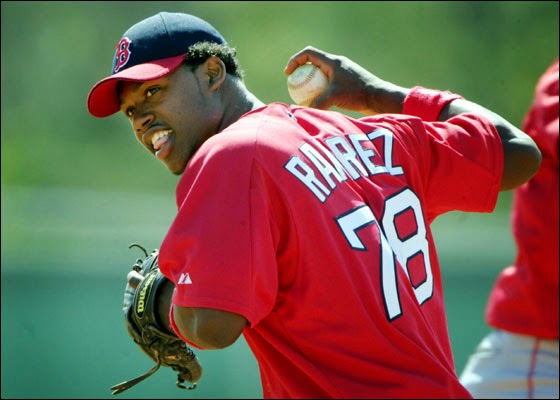