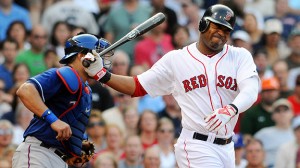 BOSTON, MA – SEPTEMBER 03: Carl Crawford #28 react after making an out in to end the third inning against theTexas Rangers at Fenway Park on September 3, 2011 in Boston, Massachusetts. The Boston Red Sox won the game 12-7. (Photo by Darren McCollester/Getty Images)