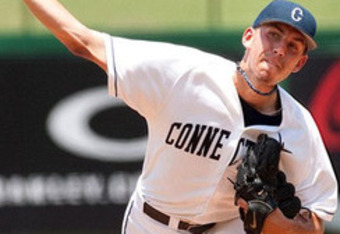 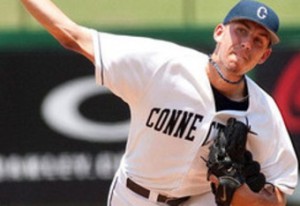 Theo and crew didn’t have to look far for to find their First Round pick when the MLB First-Year Player Draft got underway yesterday, selecting 90’s baby and UConn’s stud Junior RHP Matt Barnes at #19 overall.  UConn lacks a rich baseball history, but scouts and obviously the Red Sox believe that this kid is the real deal.  Here is the tale of the tape on the newest member of your Boston Red Sox:

UConn Career Statistics (via The Official Website of Connecticut Athletics):

The hard throwing Right Hander posted some impressive numbers during his time in Storrs to go along with a couple superb summer ball campaigns while hurling for the Wareham Gatemen of the prestigious Cape Cod League and the Collegiate USA National Team last summer.  According to MLB’s Pro Draft Central’s scouting report, Barnes’s bread and butter is a plus mid 90’s fastball that is considered one of the better fastballs in all the draft.  He compliments the fastball with three average to above average pitches, with his second best pitch being a curveball (which could use some work), a quality changeup, and a slider which is by far the weakest of his arsenal.

The kid has the body of a major league pitcher and it will be interesting to see how he develops over the next couple of years.  Jacoby Ellsbury, Clay Buchholz, Jed Lowrie, Daniel Bard, and Casey Kelly (the centerpiece of the Adrian Gonzalez deal) demonstrate the success Epstein and the Front Office have had with their First Round picks, let’s hope this former Huskie is another example.

Third Pick (36th Overall)- Henry Owens, a tall LHP from Edison High School in Huntington Beach, CA. Owens owned a 12-0 record while posting a 1.03 ERA while striking out 99 batters and only walking 13 in 78 2/3 innings of work his Senior Year.

Fourth Pick (40th Overall)-My favorite pick of Day 1, the University of South Carolina Outfielder Jackie Bradley Jr., or JBJ as the Gamecock faithful like to call him.  Bradley was named the Most Outstanding Player of the College Baseball World Series last year, leading the Gamecocks to a National Title.  JBJ hit .368 in 2010 but is batting just .259 in 2011.  A wrist injury has kept him out of the South Carolina lineup since April, probably resulting in JBJ being on the board at #40. (Great Value with this pick).  Follow my boy on twitter @JackieBradleyJr