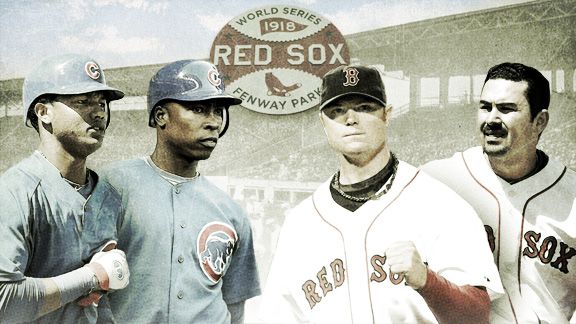 BOSTON — This was not Tim Wakefield’s first rodeo, of course.

The knuckleballer has been a member of the Red Sox’s pitching staff forever, or at least it seems that way. The truth is Wakefield has been wearing a Boston uniform for more than 17 years.

Wakefield has been a starter for the Sox. He has been a long reliever. He has even been a closer. And he has bounced back and forth between roles.

Now, at the age of 44 (he turns 45 on Aug. 2), Wakefield is the oldest active player in the majors. When John Lackey and Daisuke Matsuzaka went down with injuries, manager Terry Francona knew where to look for a replacement starter for Sunday night’s game against the Cubs at Fenway Park.

He gave the ball to Wakefield, who boasted 193 career wins, tops among active big leaguers. Wakefield has notched 179 wins for Boston, the third-highest total on the team’s all-time list.

And Wakefield responded with a superlative, efficient outing. In his third spot start of the season, Wakefield blanked the Cubs on two hits over the first six innings before being nicked for a run on a pair of doubles in the seventh.

He wound up going 6 2/3 innings, throwing only 75 pitches. He fanned three and did not walk a batter, going to three balls on only one hitter. Wakefield left to a huge ovation with a 3-1 lead.

Wakefield wound up with his first win of the season, the 194th of his career and 180th for the Sox, and Boston took the rubber game of the series 5-1, finishing the homestand with a 5-1 mark.

So this is why: On Saturday night, with the game in the balance, Francona elected not to use Daniel Bard, his flame-throwing setup man, to protect a 3-1 advantage in the eighth inning. Francona thought Bard need a second straight night off, and despite the game’s circumstances, he stuck with that decision.

Francona instead called on Matt Albers, who had a tough night, leading to an eight-run uprising by the Cubs and a 9-3 Chicago win.

On Sunday night, with the game again in the balance and Boston again leading, 3-1, Francona called in Bard with a runner at second and two outs in the seventh.

In the eighth, with Boston on top 5-1, Bard made Kosuke Fukudome look sick on an 84-mile-an-hour slider for an inning-ending strikeout.

Sweet stroke: Adrian Gonzalez is such a pleasure to watch hit, the consummate professional hitter.

In his first trip to the plate, facing left-hander James Russell, Gonzalez, a left-handed hitter, fell behind in the count at 0-and-2. But there was no panic in his approach. It was almost as if Gonzalez was in charge of the at-bat, even with the count 0-and-2.

Gonzalez calmly dropped the bat head on Russell’s next pitch, which was on the outer half of the plate, and dunked a single into shallow left. He didn’t hit the ball hard, but Gonzalez put the ball in play and found a hole.

His second at-bat was almost a carbon copy of the first. Again he fell behind 0-and-2. But once again, Gonzalez calmly went with an outside pitch, this time lacing a single between third and short for a leadoff single in the fourth that sparked a two-run flurry that gave the Red Sox a 2-0 lead.

Gonzalez has had at least two hits in eight of his last 13 games, giving him a league-leading 20 multiple-hit games.

He added on to his batting average by crushing a double off the wall in left-center off right-hander Justin Berg and dribbling a single up the middle in the seventh. Gonzalez’s 4-for-4 night vaulted his average from .328 to .342.

“I’m swinging at pitches I want to swing at,” Gonzalez said matter-of-factly after his second four-hit game of the season. “I don’t chase too many pitches out of the zone. I’m just trying to execute my game plan. You have the same thought process all the time. It’s just about execution.”

“He’s such a professional hitter,” Francona said. “He hits the ball to left field, fights off pitches. He’s a really good hitter in a really good period. I hope it lasts a long time.”

Catching fire: Francona’s roster manipulation of his catchers is paying off at the plate for Jarrod Saltalamacchia and Jason Varitek.

Up until a few weeks ago, each catcher was saddled with a batting average well south of the Mendoza Line. Lately, though, their offense has picked up.

Sunday night, Saltalamacchia clubbed his third homer in his last four games, which is saying something because his first one, coming against the Yankees last Sunday, snapped a 121-at-bat homerless streak that had stretched back to Aug. 2, 2009.

Sunday’s fifth-inning blast over the Green Monster stretched Saltalamacchia’s hitting streak to five games, (.389, 7-for-18), boosting his overall average to .237.

“It’s nice to get a pitch you want to hit hard and be able to do it,” Saltalamacchia said.

“He looks more confident,” Francona said. “And he should be because he’s playing better.”

Evened up? On Saturday night, Sox pitcher Alfredo Aceves drilled Fukudome with a pitch leading off the game. He also beaned Marlon Byrd in the face in the second inning, sending Byrd to the hospital with facial fractures.

In the fifth, the Cubs’ Carlos Zambrano seemingly retaliated, hitting Kevin Youkilis in the rear end, prompting the plate umpire, Alfonso Marquez, to issue warnings to each bench. That led Chicago manager Mike Quade to hold up his fingers and say “2 to 1,” for those able to read lips. That meant two Cubs hit, one Red Sox.

On Sunday night the score was evened up.

Kerry Wood jackknifed Jed Lowrie away from the plate with an eighth-inning fastball that just missed Lowrie’s right thigh. Wood’s next pitch drilled Lowrie in the rear end, prompting plate umpire Ed Hickox to issue warnings to both benches.

“I don’t know, after you missed once,” Youkilis said with a shrug, intimating that a second attempt didn’t seem to be necessary.,

“I guess they felt like they needed another one,” Youkilis added. “I know the other day they were saying it was 2-1. I guess now we’re even until we play them again in another 100 years.”

The visit to Fenway by Chicago this past weekend was the Cubs’ first appearance in Boston since the 1918 World Series, which Boston won in six games.

Seen him before: The Red Sox will be hitting against a familiar face when they open a seven-game road trip in Cleveland on Monday night.

Justin Masterson, a top prospect who pitched for the Red Sox in 2008 and 2009 before being traded to Cleveland as part of the deal that brought Victor Martinez to Boston, will be starting for the Indians. Masterson has begun fulfilling the promise he showed in the Sox organization. He is 5-2 with a 2.52 ERA for the Indians, who surprisingly boast the best record in the American League.

Clay Buchholz (4-3, 3.42) who was in the Boston farm system with Masterson, will start for the Sox.