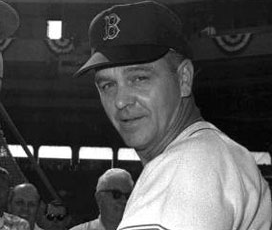 Last week, Hall of Fame Red Sox manager Dick Williams pasted away. Now I know some of you out there are scratching your heads wondering, “Who in the hell is Dick Williams?” Dick Williams was known in Red Sox lore as the man with the “Impossible Dream.” In 1967, he took over as the skipper for a losing Red Sox club that came in last in back to back seasons and had not finished above .500 in the last 8 seasons. When asked about the upcoming season during a spring training game, Williams declared, “We will win more ballgames than we lose.” That Sox team went on to win their first AL pennant in over 21 years.

Now that’s pretty impressive if you ask me. Very few Red Sox fans know about the “Impossible Dream” especially all of the “Red Sox Nation” fans that jumped on the bandwagon in 2004. It’s hard to not question someone’s fan hood these days. Any fan can tell you about the “Curse of the Bambino”, Dave Robert’s stolen base, and Curt Schilling’s bloody sock. Here are the top 10 facts about the Red Sox most fans do not know:

10. Troy O’Leary was the first Red Sox ever to hit a postseason grand slam.

9. Joe Castiglione, radio announcer for the Red Sox, grew up being a Yankees fan.

6. Roger Clemens has the franchise record of 2590 strikeouts and192 wins. Knuckleballer, Tim Wakefield is trailing behind him with 184 wins. Also, Wake just turned 44 years old making him the oldest player ever to appear for the Red Sox.

4. Ted Williams won 2 Triple Crowns. What’s stunning about this feat was “The Kid” won 1 TC, went to serve our country in WWII as a Marine Corps pilot, and came back to win another TC.

3. Carl Yastrzemski was the last winner of the batters Triple Crown in 1967. There has only been 13 Triple Crown Winners for batters in history 2 are Red Sox (Yaz and Teddy Ballgame)

2. Denton True “Cy” Young played a bulk of his career for the Boston Americans. Cy Young also threw the 1st pitch in modern World Series history. Also, I bet you didn’t even know Boston was the first team to ever win the World Series. And back then the World Series was a best-of-nine series.

1. Gene Conley a former Red Sox pitcher is the only athlete to win a World Series and NBA Championship. Conley signed out of college by the Boston Braves and the Boston Celtics. He was a 4-time MLB All-Star, member of the 1957 Milwaukee Brave WS champs, and a key reserve on 3 Celtic NBA title-championships in the early 1960’s with Bill Russell.