Change Can Be Good 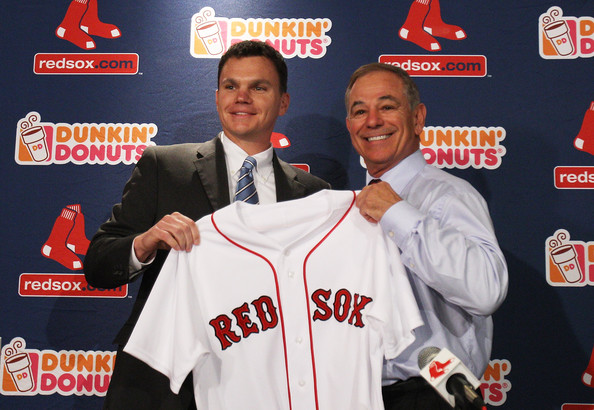 First off let me share how excited I am to be a part of the RedSoxaholics team for the 2012 season. I have been writing about minor league baseball for busleaguesbaseball.com over the past few seasons and am excited to share some insight about the team I have loved since I was born.

With the big contract signings of Albert Pujols (Angels), C.J. Wilson (Angels), and Prince Fielder (Tigers), the Red Sox have been relatively quiet this offseason. After being the front runners’ last offseason signing Carl Crawford and acquiring Adrian Gonzalez they were considered the team to beat last year.

Two of the biggest departures this offseason was Theo Epstein leaving to join the Cubs and Terry Francona manager for the Red Sox two World Series titles in the past 10 seasons. The key reason that Francona was removed from his position was clubhouse discipline, or the lack thereof. Immediately after the Red Sox collapse, a story was published revealing a need for a strong clubhouse ambassador, enter Bobby Valentine.  During Francona’s time with Boston he posted a .574 winning percentage along with two World Series rings, he also had to deal with the self-proclaimed “idiots” of 2004. For the players that were still on the roster, it became clear that Tito had lost his voice in the clubhouse and change was needed.

After interviewing several candidates, the Red Sox decided to go with an outspoken manager, who will not allow drinking in the clubhouse, and will not allow the media to manipulate him. From donning a fake mustache in an attempt to watch the duration of a game after being ejected or constantly attacking the media during his time in Japan, Bobby V. is nothing like Terry Francona. Ray Monell from Yahoo! Sports, wrote a story after the Valentine signing, mentioning how some players were unhappy and were, “grumbling to each other, through texts and phone calls.” The city of Boston and its fans demand a winning product, and loyalty. The minute it came out players were drinking in the clubhouse, the fans turned against the players and change had to happen.

Terry Francona was not the only Red Sox casualty this offseason, GM Theo Epstein also decided that it was time to pursue other opportunities. When a GM builds a relationship with a manager and the manager leaves, there is a transition period that needs to take place, a bond that needs to grow and that was not something Epstein wanted to do in Boston. Fortunately for the Red Sox Epstein had a plan in place for a successor to take his place in case he were to leave, his name is Ben Cherington. Cherington, a New Hampshire native and Amherst College graduate seems like a perfect fit for the Sox, who knows more about the passion that comes from being a Red Sox fan than someone who has grown up surrounded by it. The Red Sox have done an amazing job bringing in two guys who will hopefully make the transition from one leadership team to another a smooth one.

One of the Red Sox biggest flaws last season was their bullpen, with Daniel Bard having his worst season statistically, Bobby Jenks not living up to his potential, and Dan Wheeler posting numbers that most thought had to be a typo, the 6th thru 9th innings were always a tightrope act in 2011.  With Jonathan Papelbon (Phillies) out of the picture, Boston desperately needed closer, in comes Andrew Bailey. During three seasons as Oakland’s closer he posted 75 saves with a 2.07 ERA. While Papelbon was a fan favorite, and was a critical part of the Red Sox success, Bailey is four years younger than Pap and his numbers have been comparable as well. Get more out of the games with online sports betting where they have the best sportsbooks online.

Daniel Bard, the heir apparent to Jonathan Papelbon as the Red Sox closer came to a screeching halt in 2011. While his ERA was respectable at 3.33, his 2-9 record was unacceptable from a setup man. Those statistics are why Boston went out and signed Mark Melancon, with the Astros last season he posted an 8-4 record with a very respectable 2.78 ERA, including 20 saves. Knowing that the back end of your bullpen is firmed up allows your starters to pitch with less pressure and don’t have to worry about pitch counts as much as they have in seasons past. With John Lackey out for the 2012 season and Tim Wakefield contemplating retirement, the chance for Daniel Bard to transition to a starter became a viable option and something to watch closely. While the Red Sox have not signed the superstars people have come to expect this offseason, the people they have signed will be a huge key to their success for not only in 2012 but seasons to come.