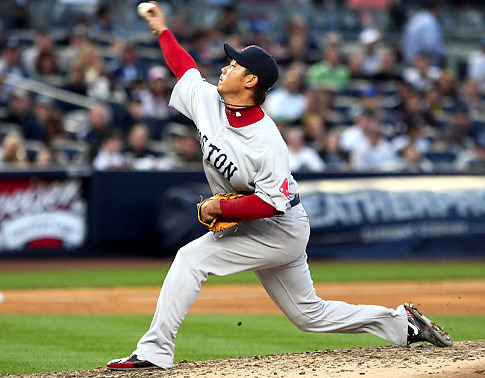 After being diagnosed with a sprained ulnar collateral ligament and strained flexor in his pitching elbow, Boston Red Sox starter Daisuke Matsuzaka has decided to get another opinion.

3-2 loss to the Cleveland Indians that Matsuzaka is in Japan rather than with the team in Cleveland, and that the pitcher has plans to meet with Angels physician Dr. Lewis Yocum.

“He has an appointment scheduled with Dr. Yocum coming up,” Francona said in Cleveland. “Diasuke has been really good about all this.”

The type of injury Matsuzaka has could result in Tommy John surgery if his rehab fails, but Francona said that is not in the cards yet.

“[He is in Japan for] a personal matter … He had permission from us to go back home,” Francona said. “He is not going to have surgery. We made that decision for him to go home a while back.”

In each of the past two seasons, Matsuzaka had landed on the DL twice. Last year, he made only 25 starts because of neck strain and a strained right forearm.

In 2009, he made just 12 starts and pitched only 59 1/3 innings. He was sidelined with a strained shoulder early in the season and again with the same injury that June.

In 2008, Matsuzaka set a career-high with 18 wins despite missing some time with a strained rotator cuff.

Matsuzaka, for whom Boston paid $103 million ($51 million posting fee, plus $52 million contract) to acquire from Japan before the 2007 season, is in the fifth year of a six-year contract.

Information from ESPNBoston.com contributor Chuck Murr and The Associated Press was used in this report.