CLEVELAND — The Red Sox’ pregame worries were in the wrong place. Their post-game concerns may be more significant after losing Dustin Pedroia.

Concerned with mustering some offense against former Boston right-hander Justin Masterson, they should have 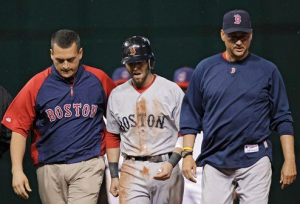 focused on hot-hitting Asdrubal Cabrera. Cabrera homered and had three hits, including a go-ahead RBI double in the eighth off Daniel Bard (1-4) that gave the Cleveland Indians a 3-2 win Monday night.

The Red Sox hope they haven’t lost second baseman Pedroia as well. He walked off with an apparent leg injury in the top of the eighth. He appeared to jam or twist his left foot — the one that was injured last season — while rounding second base. Pedroia decided not to test strong-armed Cleveland right fielder Shin-Soo Choo and go from first to third on a single by Adrian Gonzalez. He put on the brakes while rounding second as Choo fired behind him and then went down after getting back to the bag safely. He walked to the dugout and was replaced by Drew Sutton.

Just when it appeared Carl Crawford may start contributing in a big way, he bounced into a game-ending double play with runners on first and third. It kept Boston from tying the score and possibly rallying for a win that could have put them in first place in the AL East.

Crawford hit his first homer since April 24 and also singled and scored, but the Red Sox are now 0-4 in Cleveland this season. A three-game sweep at Progressive Field five weeks ago left them with an 0-6 record — and did a great deal toward supplying the Indians with the confidence to go on a long run. The Indians have baseball’s best record at 30-15, including 19-4 at home.

Manager Terry Francona loaded his lineup with five lefties and two switch-hitters against Masterson. The ploy worked — sort of — as Crawford got two of the group’s four hits in 21 at-bats against him.

Entering the game, Masterson had held right-handed batters to a .141 average, lowest in the majors, but lefties had hit .326 against him.

As preoccupied as the Red Sox were with trying to muster some offense against Masterson, they were confident that Clay Buchholz could earn his fourth straight win and fifth in six decisions since April 20.

Buchholz had thrown a season-high 127 pitches in a seven-inning no-decision against Detroit last Wednesday, but Francona said he thought the right-hander would still give the Red Sox a strong start.

“He won’t do that again,” Francona said before the game of the high pitch count. “But he bounces back very well. We’ll keep on eye on his workload.”

Despite making first-pitch strikes to only 13 of the first 26 batters he faced, Buchholz gave up only four hits — two of them to Cabrera. The right-hander made 94 pitches and gave up two runs and four hits over 7 1-3 innings.

Each starter had fully warmed up when showers hit Progressive Field five minutes before the scheduled first pitch. After a 61-minute delay, both had to do it all over again. Neither seemed to be affected.

Cabrera, the hottest hitter in the AL not named Adrian Gonzalez, hit a 408-foot homer leading off the fourth to tie the score at 1. It was the seventh consecutive hit for the switch-hitting shortstop, who went 5-for-5 with 5 RBIs Sunday in a 12-4 win over Cincinnati, and singled his first time up against Buchholz.

Pedroia put the Red Sox ahead 1-0 in the third with a hit-and-run single.

Crawford got Boston’s first hit when he beat out a grounder into the hole at shortstop for a one-out single. One out later, Masterson hit Jacoby Ellsbury with a pitch. Francona put both speedsters in motion and Pedroia showed great bat control by poking a pitch between first and second. Crawford scored easily, Ellsbury went to third, but Masterson limited the damage by getting Gonzalez to ground meekly to first.

Crawford opened the fifth with his second homer, a shot into the right-field seats on a 1-1 pitch to put Boston ahead 2-1. It gave Boston’s big offseason free-agent signing two runs in a game for the first time this year. He scored 80 or more in seven of his eight full seasons in Tampa Bay.

The Red Sox caught a huge break in the fifth when Jack Hannahan walked on four pitches and stole second _ but was called out for oversliding the bag and being tagged out by shortstop Jed Lowrie. Austin Kearns banged the next pitch off the right-field wall for a double that would have easily scored Hannahan.

Lowrie was unlucky in the seventh when his sharp grounder up the middle was snagged by second baseman Orlando Cabrera with a diving backhanded effort. Cabrera threw while laying on the outfield grass and his one-hop throw was in time for the out. Cabrera then made a nice play on a line drive off the bat of Crawford to end the inning.

Masterson, traded to Cleveland in the deal that sent Victor Martinez to the Red Sox, gave up four hits and two runs over 7 2-3 innings. He walked two, hit Ellsbury and Kevin Youkilis with pitches, and struck out three.

Joe Smith (2-1) retired the only batter he faced to end the eighth and get the win. Chris Perez pitched the ninth for his 13th save in 14 tries.