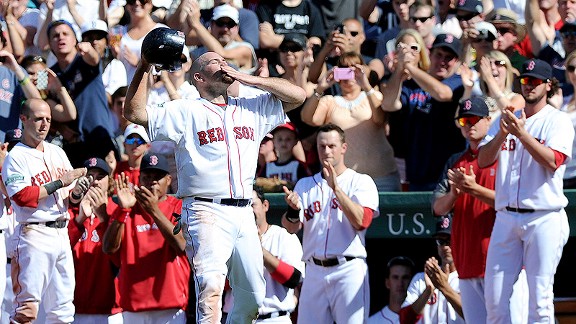 The Red Sox finalized a deal with the Chicago White Sox mid game and wasted no time giving Youk the boot out of Boston. Not even an hour after the game, they removed his nameplate and cleaned out his locker. Talk about an awkward ending to an even more awkward last few weeks for Kevin Youkilis.

While it was a nice gesture, I genuinely felt bad for Youk after being pinch run for after his triple in the seventh inning. It felt like he was being taken out after playing his last varsity basketball game or something. It also seemed like the whole team knew something he didn’t. He wanted nothing to do with the last curtain call, and I don’t blame him. Between Bobby Valentine, the media, and the rise of Will Middlebrooks, the last few weeks have gone downhill for Kevin Youkilis. I’m kind of glad it’s over, but only because I really think Youk deserves to play somewhere that he’s wanted, and it was just getting plain hard to watch.

In the past nine seasons with the Red Sox, Kevin Youkilis has a .286 batting average, won 2 World Series titles, a Gold Glove, the Hank Aaron Award, 3 All-Star Game appearances, and has finished in the top six of the MVP voting twice. He accomplished things in Boston that many players can only dream of.

There are some players that get traded and you wish a jinx upon them, hoping that they had their best days in Boston, but I don’t feel that way about him. I really hope he is successful with the White Sox, and in the rest of his career. You have to respect a guy that gives you 100% every night. David Oritz is now the last remaining player of the 2004 World Series Red Sox roster.

Even though I think he’s ready, Will Middlebrooks certainly has some big shoes to fill in Boston. Now someone get him a real number already.