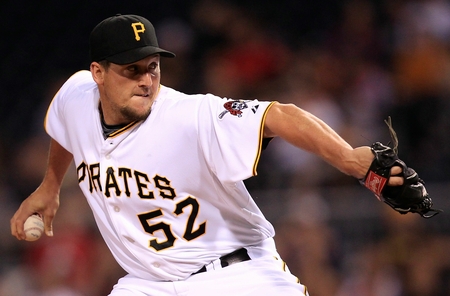 It was being reported Saturday afternoon December 22, 2012 that the Red Sox acquired Closer Joel Hanrahan from the Pittsburgh Pirates, rounding out what many are calling an incredibly successful off-season!

Hanrahan should add to a bullpen that often decimated by injuries, faltered many times last season. Along with Melancon and Andrew Bailey returning the Sox coaching staff should have more than enough firepower to work with this upcoming season!

This move rounds out a very busy December where management tried to re-shape the clubhouse and the team. With the departure of Manager Bobby Valentine, change would have to start at the top.

The Red Sox were lucky to obtain the well-liked pitching coach John Farrell back from the Toronto Blue Jays and promote him to manager! It seems to be a move approved by the players many who already have experience with him.

Next, for GM Ben Cherington would come some big player moves! The most exciting one for me is the acquisition of Angels/Rangers power-hitting veteran Mike Napoli! The right-handed slugger will probably fill in at first base and will have plenty of opportunities to launch homeruns over the Green Monster!!!

While the Red Sox could not afford to keep Cody Ross they did get Ryan Dempster to further bolster their pitching staff! An area they need vast improvement in.

Veterans Shane Victorino and Stephen Drew(J.D.’s brother) also join a core group of experienced hitters including Pedroia and Ellsbury to go along with up and coming stars like Pedro Ciriaco,Middlebrooks, Iglesias, etc.

The main changes seem to be around making a better atmosphere in the Clubhouse!

Jason Varitek will serve as a special assistant and will probably help young catchers Jarrod Saltalamacchia and newly acquired David Ross. We all know Varitek will be important to have around. He has some good young players to show the ropes to as well!

In another excellent move, David Ortiz was re-signed to stay with the club where he already has become a legend in winning 2 World Series Championship Rings! Let’s hope the near future sees him getting number 3!