A Lost Season for the Red Sox Winds Down 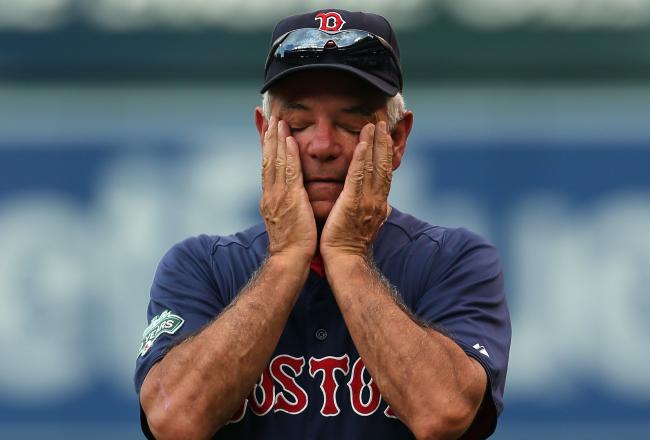 With the season winding down Red Sox fans are secretly filled with joy that what has been a disastorous few months of summer is finally almost over. In arguably their worst season in franchise history, the Sox have seen the lowest of lows. Many blame manager Bobby Valentine, some the management, and the players have received their fair share of critisizm as well. Blowing it up doesn’t even began to describe what Boston has done this season shipping out the likes of Kevin Youkilis, Adrian Gonzalez, Carl Crawford and Josh Beckett, but many remain optimisitc.

With just 13 games left, Boston will face the division rivals Yankees, Rays, and Orioles in their last few series. No one likes to see their team to be labled as spoilers, but at this point that’s all the Red Sox really have to play for. All three division teams are still fighting for the playoffs and the only thing that could cheer Boston fans up is maybe having something to do with the hated New York Yankees not making a post season appearance. If I was betting on the Red Sox, I probably wouldn’t put all my chips in at once, but there is still some fight in a lot of these players.

We could talk about baseball negatives all day, but should not fail to mention the few positives that have come about this season. The emergence of Pedro Ciriaco has been a very exciting thing to watch. Struggles lately has brought is average a little below .300, but for a while you couldn’t get this kid out. His speed on the basepaths and contact at the plate has made him an instant fan favorite who should be fighting for some serious playing time next season if not a starting spot.

Many weren’t sure if Cody Ross could cut it in right field after the team signed him to a one-year deal. They were dead wrong to say the least. With his late game heroics on many occassions and power at the plate Ross has a respectable .276 average this season with 21 homeruns and 74 RBI’s. The only downside is he will probably be looking for a larger contract this offseason and it still remains to be seen which direction the Red Sox will go. Regardless, we can only  hope bringing back Ross is on the top of Ben Cherington’s to-do list.

There are too many questions to be answered right now. Theres a small chance Valentine will return as manager next year, but its possible. It’s doubtful the Red Sox will sign any major free agents this offseason, but it could happen. The only thing we know is something needs to be done. It may be the most important offseason in Red Sox history as it will determine the direction of this team for the next few years to come.