Red Sox Nation Rejoice! Pedro Martinez is Back To Help The Team! 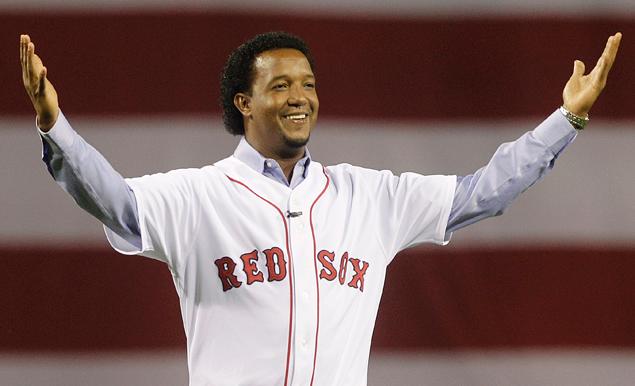 It’s time for Red Sox fans to rejoice! Not only has the deal for hard-hitting catcher/1B Mike Napoli been sealed…not only has clubhouse friendly manager John Farrell at the helm now….not only is Varitek back with the management…not only did they acquire some important players including a verified closer from the Pirates and in Shane Victorino a role-player with lots of playoff experience…..but now in a surprising yet welcome move, Red Sox legendary pitcher Pedro Martinez is back in Boston to accept a position as Special Assistant to the General Manager!!!!!!!!!!

The position will help second-year GM Ben Cherington who also hired Catcher Jason Varitek to assist him with clubhouse relations as well as the day-to-day running of the team.

After last year’s tumultuous season the Red Sox organization might have well posted a Help Wanted sign on Yawkey Way with neon lights to express their need! The team underperformed and fans were disappointed with apparent lack of effort by most of the team. Varitek being the good guy that he is as well as an excellent candidate for a future manager or Pitching coach (he caught more than one no-hitter, two championships) stepped up in the turmoil to assist the Red Sox team! Now one of the most dominating pitchers of all time(check his E.R.A.) and one who can be credited with being a key player that ended the 86-year old curse in 2004…. Pedro Martinez re-joins the struggling Sox! What a dynamic team in Varitek and Pedro Martinez (who Red Sox were treated to see some awesome and beasutifully pitched games over the years) will make in guiding younger players to good attitudes and winning ways!

Who can forget the marvelous comeback in 2004 and the end of a long world series drought! Pedro Martinez was incredible during that stretch run…. of which we hope to see more of from this younger bunch in the years to come! Former Manager Terry Francona was thrilled, and exclaimed” It will definitely help the team as Pedro and Jason were the heart of the team in that 2004 stretch run!”The Red Sox are looking better already and with pitchers and catchers ready to report in a few weeks… I say Go Sox Go!