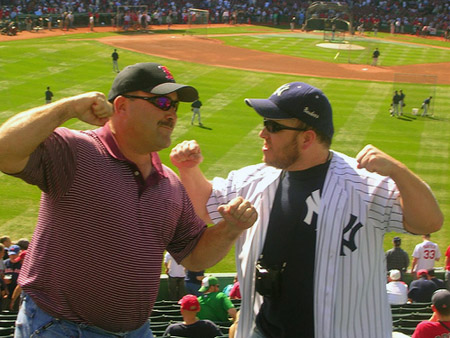 The Red Sox are finishing a frustrating week with a trip to New York for a weekend series against the Yankees this weekend.

The week started with the Red Sox bats exploding during Sunday’s game against the Indians where they scored 14 runs in a victory to take the weekend series from Cleveland at Fenway Park. It looked like the Sox were finally breaking through this season. They had games vs. the Orioles that would allow them to gain ground in the playoff race. Unfortunately, as of Thursday night during the writing of this article they had dropped 2 out of 3! Manager Bobby Valentine was tossed from the game arguing a call on Wednesday night’s game but at least they are fighting through the frustration.

This sets up this weekend’s matchup against the disliked Yankees as one that is pivotal if the Sox are going to make a playoff run. They are certainly within distance! Especially in the Wild Card Race. The Sox must beat the Yankees and get back above .500 soon! This series might be more awkward as Red Sox Hero and Legend Derek Lowe was signed by the Yankees this week adding even more frustration to Red Sox Nation!

However, only a few players remain from that team. This is a younger Red Sox bunch looking to find a way to win and capture a title  too. Maybe they can learn a lesson or too from late Red Sox longtime player/fan JohhnyPesky whom the right field foul pole is named after! He played with a positive and consistent attitude with much success. Let’s hope these younger players find out how to do this soon also! They definitely have the potential and play for perhaps the best baseball organization in sports. Hang in there Red Sox Nation and Go Sox!