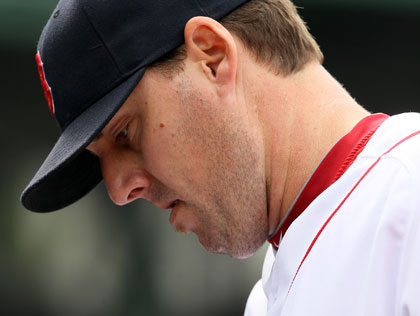 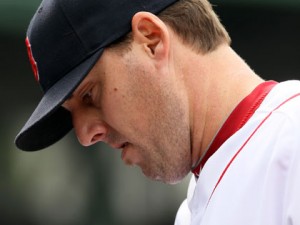 It has become an extremely apparent problem around The Nation:

John Lackey lives up to his last name.

The veteran right-hander who had clinched the World Series for his team in 2002 was signed with the Red Sox in 2009 for a whopping 82.5 million dollars. We all knew that was going overboard for someone who was bound to be the third or fourth man in the rotation, but Lackey had proven his worth with a solid track record seven years into the major leagues. In 2011, he’s 5-8 with a 7.47 ERA and is quite frankly the only dark spot in an otherwise solid staff. Journeymen like Alfredo Aceves and Scott Atchison are worth more than Lackey at this point. Prospects like Andrew Miller and Michael Bowden would give you more, yet there is something that goes further than baseball to blame for Lackey’s eerie season.

His personal problems were his alibi early on and rightfully so. His wife had suffered through a miscarriage and just a little over a year later, she’s battling breast cancer. Lackey has had his health problems as well. As much as we love the game of baseball, I think most sympathized with his position. In his last start in Philadelphia Lackey allowed just 2 runs and had the only RBI for the Sox. It seemed he was coming around. After yesterday’s game, however, he took seven steps back.

I find it hard to blame Lackey for his struggles lately. There have been looming questions about whether or not he requires Tommy John surgery. He has denied any such rumors and honestly, if he needed surgery, he would not physically be able to throw 93 mph. It goes much deeper than his health.

I believe it is the job of the coaching staff to make a decision when someone like Lackey who has had a decent career up until this point is struggling so mightily. The All-Star game is around the corner and the Red Sox are only 1.5 games behind the Yankees in the AL East. Maybe Lackey could use some rest and relaxation, a trip to an evaluator to truly check out his elbow and some time in the minor leagues. There is still time to get his head right.

The Sox face some pretty tough pitching decisions. Keep Andrew Miller in the starting rotation? When is Clay Buchholz returning? Felix Doubront and Kevin Millwood are waiting. What to do about John Lackey?