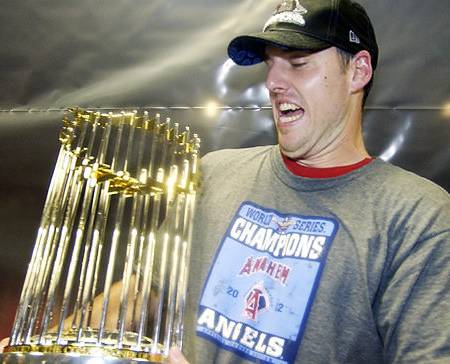 Twitter has let me down of late (doesn’t help trying to break trades after a couple cocktails either), but word on that beast is that last year’s American League ERA leader, Clay Buchholz, has a stress fracture in his back and is likely to miss the remainder of the season.  I do not believe this injury will stop the Sox from winning the A.L. East but it certainly hurts their chances in any 5 or 7 game series (especially against the Phils).  Outside of Lester and Beckett the starting pitching has been so-so this season, and what was considered the strength of this Red Sox team at the start of spring training is now their biggest question mark heading into the dog days of summer.  Buchholz was not posting the numbers of last season, but I would feel very comfortable with him on the bump against anyone’s number three starter and now the Sox do not posses that luxury.

The season must go on and I still feel great about this Sox team making it deep into October.  The opportunity is here for my number one stiff, John Lackey, to at least justify a little of that contract.  Lackey has won a World Series Game 7 and anchored the pitching staff of a very successful Los Angles Angles of Anaheim ball club for a number of years, so I know he has it in him.  Honestly as a Sox fan, I HATED watching Lackey take the mound against the Red Sox in the playoffs.  He competed his balls off, threw nothing but strikes, most of which were impossible to square up, and was the kind of pitcher I would love to see in a Sox uniform.

Prior to last season I got my wish, I was excited about the Lackey signing (not crazy about the amount of money though),  and let’s just say I finally realized the meaning of that goofy “be careful what you wish for” saying.  My expectations for regular season John Lackey were moderate, I thought he would win 13-15 games, have a decent ERA, but would give the Sox a chance to win every time out (obviously not the case).  I was most excited for post-season Lackey, who wouldn’t love a proven top of the rotation veteran pitching Game 3 in a playoff series?  Lackey made his name in the playoffs and was excellent every time he took the mound in October (often against Red Sox and Yankee lineups), it seemed like Boston would be a perfect fit.  The Sox came up short of a playoff birth last season and we have yet to witness the post-season Lackey I was looking forward to after he arrived in The Hub. This year’s rendition of the Red Sox seem poised to make the dance and now is Lackey’s chance to put his first year and a half in Boston behind him.  Lackey actually hasn’t looked so terrible of late, a decent end to this season and a couple solid starts in the playoffs will go along way in helping Lackey rehabilitate his rocky relationship with the Fenway Faithful. Call me crazy but I’m with El Pres on this one and I think he has it in him (nice D Lowe comparison). I am officially ending my feud with Lackey and will be his number one supporter from this day forward, let’s go big dog.

P.S.  I will not address Erik Bedard until he has 5 quality starts in a Red Sox uniform.  I like the move because Theo did not give up much, but I am not going to piss on your boots and tell you its raining by saying he will be the difference down the stretch.  Bedard adds depth but I have major questions about an injury prone stiff who is on record saying he never wanted to pitch for a big market team (your boy couldn’t even get out of the 2nd inning due to trade rumor pressure, can’t wait to see him pitch in one of the most scrutinizing sports cities in the country).