What if they blow up the Dodgers? 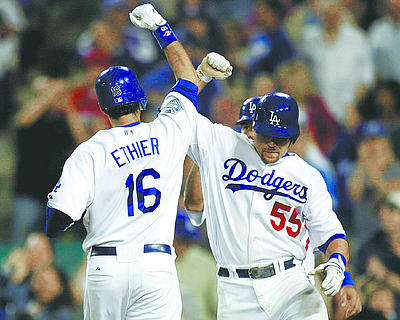 Hypothetical situation that will probably never happen because MLB wants to make the Dodgers as appealing as possible to the highest bidder, but what if the Dodger’s just decided to have a fire sale at the trade deadline? Who would the Red Sox want?

Both Matt Kemp and Andre Ethier are free agents at the end of the year and Frank McCourt can’t afford a $5 footlong never mind two of the best outfielders in baseball  (Free advertisement this time Subway but soon you will pay).

With the Red Sox need for a right handed bat it would be nice to get Kemp, but a better overall fit would be Ethier. Put him in right field, let him mash (BA- .312 HR-7 RBI’s-42 OPS-.833) as he has for the last few years and all the sudden we went from a great outfield with DL Drew to the greatest outfield.

Another player who is on the market that Theo will take a look at is Hiroki Kuroda. His stats won’t wow you (6-10 ERA-3.06 GS-18), but he has been more than serviceable. With the current staff on the DL and John Lackey doing his best Chet Steadman impression (I’m going for 1 movie reference/blog) we need another arm and it won’t take too much to get him.

Trade deadline is coming up and Theo has said he needs a position player. Hopefully its someone that can take over for JD Drew. With Lester going on the DL that should force his hand to bring in another Arm. Who knows what he will do but “In Theo We Trust.”