First Half Grades By Position 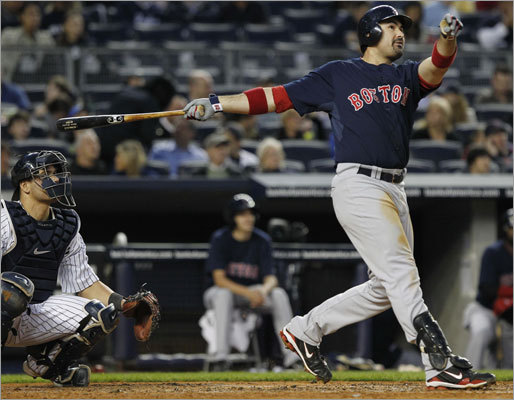 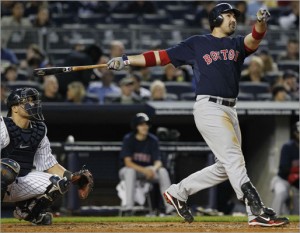 Reader advisory:  These grades are based off how these players have performed based on the expectations I had for them going into the season.  Pretty pumped to be on the giving end of some grades as opposed to the receiving.

Jarrod Saltamacchia/ Jason Varitek: Despite a slow start Salty has been a pleasant surprise this season hitting .251 with 6 HRs and 24 RBI.  The numbers do not wow you but there are certainly sufficient for a back end of the order kind of guy.  His defensive has been solid for the most part with the staff trusting him more each time out.  I like what I have seen out of this once highly toted prospect. Tek is doing his thing behind the plate, especially every 5th day for Joshua Patrick and his batting numbers are similar to those of Salty.  I was prepared to lose a little defense to gain a little offense with Salty taking the every day catching duties, but with Tek swinging it decently and Salty not throwing it all over the place this combo has done well.

This will be the only A+ I will be handing out but it is well worth it.  The guy has been as advertised, you always hear the overpaid free agent bust chatter (Jayson Werth cough cough), but I am pretty sure the Sox are underpaying for Gonzo.  The Sox had a hole in the middle of their lineup and Adrian Gonzalez has done more than fill that need.  He has started all but 1 game for the Sox this season, batting .354 with 17 HRs and 77 RBI and has been very solid defensively.  I am not overreacting when I say I think Gonzo is the best hitter in all of baseball and I wouldn’t be surprised if he was handed the AL MVP award before the All-Star Game tomorrow.

Dustin Pedroia has been Dustin Pedroia the first half.  The numbers read .284 BA 11 HR 44 RBI, solid average and some above average power for the little guy.  Pedroia is one of those guys whose stats do not reflect his importance to his team’s success, the former MVP is the leader of this clubhouse and will most likely be handed the “C” once Tek hangs them up.  Pedroia has been streaky at the plate this year, defensive as solid as ever, but I am convinced his biggest contribution this season was keeping the clubhouse level headed during the rough stretch to start the season. Gotta love this guy.

Let me start by saying I do not like Kevin Youkilis the person, just annoying to watch with all the whining and crap, just gives me the loser vibe.  However I am grading the on field Youkilis and that Youk has not disappointed.  The guy is as sure of a player you can find from a numbers stand point, will always hover around .300, gets on base, drives in runs, scores runs, hits 25 plus bombs, and plays gold glove caliber defense.  This first half has been no different and that is why he is an All-Star.

Going to keep this short (no pun intended).  When Scutaro got hurt Lowrie got hot, and when Lowrie got hurt Scutaro got hot.  The bottom line is both play viable defense and put the ball in play, when healthy Lowrie probably has a higher upside offensively but it does not matter to me which one is holding down the SS position and either will be a fine fit for the stretch run.

This grade represents the outfield as a whole.  Ellsbury recieves an easy A from me.  After a down injury filled season the once top prospect has performed as hoped leading to a 2011 All-Star selection.  His numbers tell the story, posting a .316 BA to go along with his 11 HR, 49 RBI, and 28 bags. Tito has always said the Red Sox are at their best when Ells is in the leadoff spot and it doesn’t look like he’s going anywhere anytime soon.

Carl Crawford receives a C on my report card. Crawford dug himself a huge hole with a dismal month of May but during some stretches this season he has shown signs of the player who was granted over $150 MM this past off season.  A hamstring injury has placed Crawford on the sidelines but I am confident his second half performance will lead to a different grade at season’s end.

Nancy Drew gets a D- because he’s brutal.

Josh Reddick has been a huge surprise this season and gets a B+.  Reddick has seen limited playing action but has done the most with it hitting a cool .394 in 23 games this season. I know it is a relatively small sample size but I would not be opposed to Reddick getting some every day action in Drew’s place if Theo can’t fill that need by the deadline.

Darnell McDonald has not been the same guy we got to know last year and receives a D+.  He has struggled at the plate all season but has shown signs of snapping out of it in recent weeks.  His defense has been decent and he will be a solid option off the bench during the dog days of summer.

Lets begin with the All-Stars. Josh Beckett had an historic first half of the season and will be able to place an A on the fridge, he is pitching like an Ace and it has come as some what of a surprise after his struggles last season.

Clay Buchholz has had his struggles this season but has managed to post a 6-3 record with a 3.48 ERA resulting in a grade of a B.

Tim Wakefield also receives a B.  There is no need to discuss Wake’s stats, the bottom line is he has filled in nicely while returning the rotation by giving the Sox a chance to win almost every time he takes the mound.

Finally the reverse curve buster, John Lackey.  Lackey has almost been as bad as J.D. Drew and will also receive a D-. My disdain for Lackey is well documented so there could be some bias to this grade, to give credit where credit is due the Million Dollar Man has turned in two nice starts in last last three, I know it is a stretch but it would be nice if he figured it out.

Lets start with the three guys who posted the highest marks thus far.  In his contract year Papelbon has been spectacular closing out 20 games in 21 opportunities and receives an A for his efforts.

The star pupil not named Adrian Gonzales has to be Matt Albers.  Albers stats are great (2.55 ERA, 34 SO’s, 35.1 IP) but they only tell half the story.  It feels as though every time I look up this season Albers is either putting out fires started by Lackey, pitching great in meaningful situations, or simply eating innings in games that may have gotten away from the Sox.  Albers is a managers dream, a total team player with the numbers to boot, the heartthrob of the Sox gets an A- thus far.

Alfredo Aceves (Alfredo Sauce) has been up and down this season but overall has done a serviceable job, making some nice spot starts and eating innings out of the pen, I have to give him a B.

I am going to keep it short with Dan Wheeler, to be honest I have not read about him much or remember seeing him much so that means he must doing his job, when we start hearing more about him it means he is not quite cutting it, but thus far I have to give him a B as well.