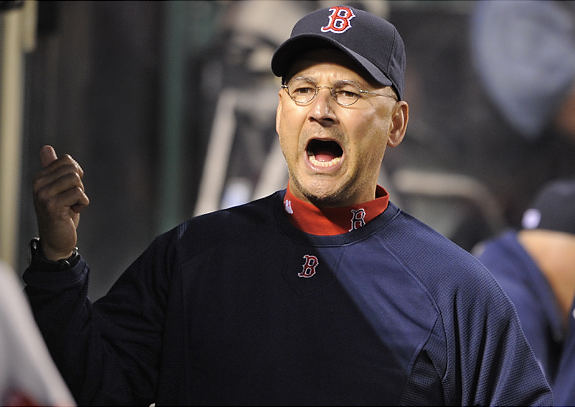 Nice article from Gordon Edes and ESPN Boston breaking down some of the possible Red Sox manager candidates. Let’s face it this season was tough and it after the Sox collapse it’s difficult to bet on baseball these days. If you had to there is a lot of options as far as sports betting online, but would you put your money on this Red Sox team even with a new manager. Was it a mistake letting Terry Francona go? Only time will tell, but this off-season will be nothing short of interesting to say the least. Here are some of the potential manager candidates according to Edes:

As the search for a new skipper begins in earnest under new general manager Ben Cherington, here are 15 candidates that could crack the Red Sox’s list of prospective candidates:

DeMARLO HALE, 50, RED SOX BENCH COACH
The Sox were willing to stay in-house for GM with Ben Cherington, pointing to the arc of his career as worthy preparation for the job. Applying the same logic, Hale should be high on their list as manager. His dance card — minor-league manager, big-league coach, Terry Francona’s bench coach — makes him as qualified as anyone.

SANDY ALOMAR JR., 45, INDIANS BENCH COACH
Alomar spent 20 seasons as a big-league catcher, and has coached with the Mets and Indians. He was a finalist for the Blue Jays’ job that went to John Farrell last season, and was mentioned as a candidate for the White Sox job until the surprise hire of Robin Ventura. He has never managed.

RYNE SANDBERG, 52, LEHIGH VALLEY IRON PIGS MANAGER
Was offered the Pawtucket job by the Red Sox last winter but elected to work for the Phillies instead. The Hall of Famer cut his managerial teeth in the Cubs system; showed a willingness to pay his dues but left the Cubs when Mike Quade was hired. He could be on Theo Epstein’s list if he elects to replace Quade. Epstein said Wednesday on ESPN radio in Chicago that Sandberg was the humblest Hall of Famer he had ever met.

DAVE MARTINEZ, 47, BENCH COACH, RAYS.
He has spent the last five years soaking up knowledge from Joe Maddon and Don Zimmer, and is regarded as a manager-in-waiting. The only question may be his ability to handle media demands in a place like Boston. He has never managed.

PETE MACKANIN, 60, PHILLIES BENCH COACH
Mackanin, a former big-league second baseman, has had extensive minor-league managing experience and big-league coaching experience, but has had just two brief turns as a big-league manager, both on an interim basis. Mackanin finished out the 2007 season as Reds manager, guiding the team to a 41-39 record, but was let go when the Reds hired Dusty Baker.

JOEY CORA, 46, MARLINS BENCH COACH
The older brother of former Sox infielder Alex Cora, he played 11 seasons in the big leagues. Cora managed in the Mets’ minor-league system before Ozzie Guillen brought him in as a White Sox coach in 2003, and the two have been together since. Cora was a finalist for the Brewers’ job that went to Ron Roenicke last season.

DON WAKAMATSU, 48, BLUE JAYS’ BENCH COACH
The first Asian-American manager in big-league history, Wakamatsu guided the Mariners to a 24-game improvement in 2009, then was fired in his second season, when the Mariners tanked and Wakamatsu had widely publicized falling-outs with Ken Griffey Jr. and Chone Figgins. Wakamatsu is bench coach in Toronto, the same role he held with Texas from 2003 to 2006.

TREY HILLMAN, 48, DODGERS BENCH COACH
Hillman had a highly successful career as a manager in Japan, then a disastrous stint as manager of the Royals, lasting just over two seasons. He previously had interviewed for Rangers and Padres jobs after extensive time managing in the Yankees system and becoming Texas’ director of player development.

BUD BLACK, 54, PADRES MANAGER
San Diego let Jed Hoyer and Jason McLeod leave to join Epstein in Chicago, but may draw the line here. The Sox wanted to interview him in 2003 before hiring Terry Francona but he declined, preferring to remain as Angels pitching coach. He’s a close friend of Francona.

JERRY MANUEL, 57
His nine years of managing experience with the White Sox and Mets include a division title in Chicago in 2000, when he was named AL Manager of the Year. But Manuel was never able to overcome the stigma of the Mets blowing a seven-game lead with 17 to play in 2007, and was fired in 2010 after two seasons in which the Mets were decimated by injuries. Cerebral and low-key, Manuel scores high in communication skills and would seem to fit the Sox profile of seeking a players’ manager.

BRUCE BOCHY, 56, GIANTS MANAGER
There is no reason to believe San Francisco will let Bochy go one year after he guided them to their first-ever World Series title, but he is entering the last year of his contract and because of his connection with Larry Lucchino, who was Padres CEO when Bochy guided the Padres to a World Series in 1998, it’s reasonable to think the Sox will at least ask.

ERIC WEDGE, 43, MARINERS MANAGER
A catcher who had a cup of coffee with the Red Sox, Wedge was only 34 when named manager of the Indians. He was AL Manager of the Year in 2007, when the Indians lost a 3-games-to-1 lead to the Red Sox in the ALCS. He was fired by the Indians after the 2009 season but just completed his first season in Seattle, where he is leading the Mariners’ rebuilding efforts. It’s hard to conceive that the Mariners would let him go.

BRAD MILLS, 54, ASTROS MANAGER
Terry Francona’s best friend in the game, Mills was well-liked and respected here as bench coach before being hired as manager of the Astros, one of the worst teams in baseball last season. With a change in ownership coming in Houston, Mills could be available.

TOREY LOVULLO, 46, JAYS FIRST-BASE COACH
Lovullo, who managed Pawtucket in 2010 before moving on to Toronto, was a finalist for the Indians’ job that went to Manny Acta, having managed in Cleveland’s system. He was previously interviewed for the Dodgers’ job that went to Grady Little in 2006.

JOE McEWING, 39, WHITE SOX THIRD-BASE COACH
Only four years removed from the end of his playing career, McEwing, known as “Super Joe” during his big-league career as a dirt-dog utilityman, has scored high marks for his managing in the White Sox system, and is currently managing in the Arizona Fall League, breeding ground for future big-league managers. Just added to Robin Ventura’s staff with the White Sox, McEwing is a high-energy type who could be the next Joe Maddon.